Seasonal timing, or phenology, determines how an organism’s life history unfolds over the course of a year. When environments fluctuate seasonally, natural selection on a particular trait depends on position within a calendar year. For example, organisms with complex life cycles may time active life history stages so that they occur only during the warmer periods of a temperate year, synchronizing dormant stages with harsh, winter conditions. The pitcher plant mosquito Wyeomyia smithii, for example, overwinters as a diapausing larvae in the water-filled leaves of the purple pitcher plant, Sarracenia purpurea. 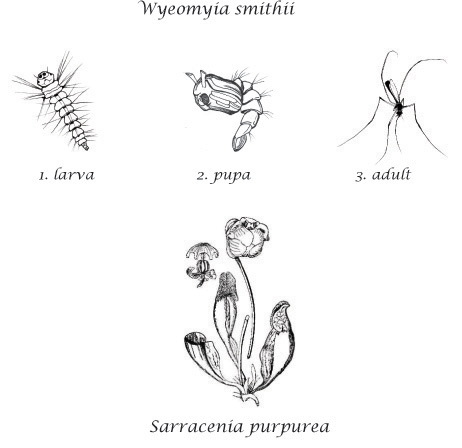 We generally expect that higher latitude or altitude populations of a broadly distributed species will be more cold adapted because average temperatures decline with increasing latitude and altitude. Likewise, we expect the opposite trend for heat adaptation. Timing of diapause often evolves along geographic clines, however, affecting expected trends in selection. For example, evolved differences in diapause timing cause geographically disparate populations of pitcher plant mosquitoes to experience fairly comparable low temperature exposure during times when they are actively growing and reproducing.

Annual distributions of daily minimum temperatures at field sites in Florida, coastal and montane North Carolina, and Massachusetts for the entire year and the growing season only. The growing season is defined as the period of the year between diapause termination and diapause initiation.

We are interested in how this interaction between seasonality and natural selection affects the evolution of both life history timing and thermal adaptation. From a genetic perspective, our research shows that there is surprisingly little constraint on distinct life stages independently evolving in response to the different thermal environments that they encounter across the life cycle. 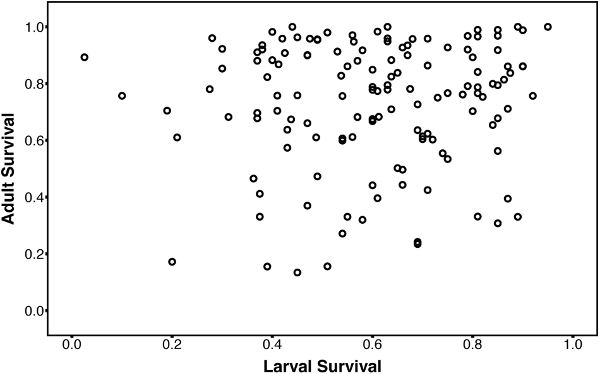 Tolerance of cold temperatures of adult flies from DGRP isofemale lines of Drosophila melanogaster is completely genetically decoupled (no genetic correlation with) from tolerance of larvae, another life history stage. Fig. 1 from Freda et al. 2017, ICB.

Ongoing efforts in meta-analyses and optimality modeling further suggest that 1) greater latitudinal predictability of the timing of seasonal transitions compared to annual average or extreme temperatures may explain observed latitudinal patterns of thermal physiology and dormancy timing, and 2) although fitness surfaces may be rugged, seasonal timing and thermal parameters may have equivalently large effects on fitness. 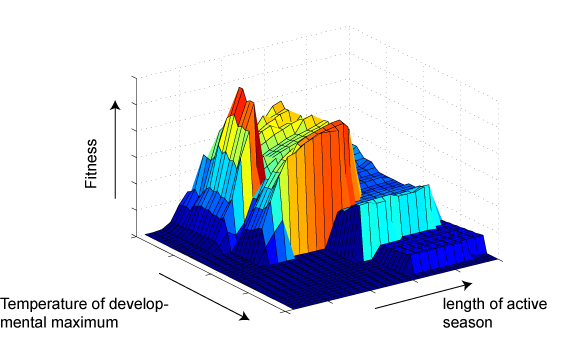 Relationship between fitness, length of growing season (i.e, timing of dormancy), and temperature of maximum developmental rate (the temperature at which a curvilinear function relating development rate to temperature is maximized) in a model simulating a multivoltine population of pitcher plant mosquitoes in a seasonally variable thermal environment.